I bike but I'm not a cyclist. By European standards I'm more like a girl on a rocking horse calling herself an equestrian. When Amanda and Dave suggested we spend our Saturday afternoon in Annecy  to see the 20th stage of the Tour de France I couldn't say no. Annecy, a small town with a population of 52,000, is located in the Haute-Savoie and it is charm personified. The day was also forecasting sun,sun,sun.


We left at 8:30am. Although Annecy is only an hour away by car and The Tour de France didn't start until 1:30pm, we didn't want to take our chances with traffic and panic parking. This gave us plenty of time to walk around.

Annecy is a popular place for shopping if you live in Geneva where variety and price are very limited. There are antique markets, pedestrian cobblestone walkways and a massive waterfront park for picnics and boating. After trekking around the city we found ourselves a nice spot along the race route in the shade to hunker down in. An hour before the event, a parade of sponsors was held. 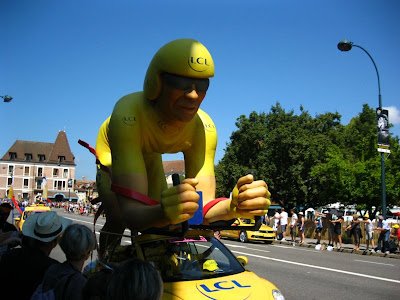 Cars whipped by the crowd throwing out water, candy, hats, key chains and pens. Amanda was hands down the winner at this event and with an hour to wait in 30 degree heat it certainty got our energy levels up. 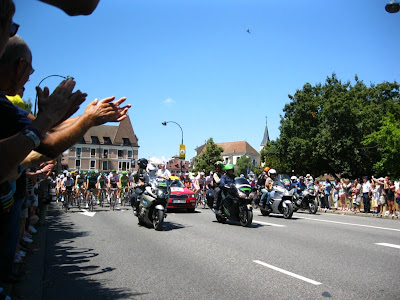 For the first 5km the riders were required to stay in position for safety reasons, until they were out of the city. Still, it took them less than 20 seconds to pass us. Scrambling for pictures while struggling to be in the moment, the event turned out to be a little anti-climatic. 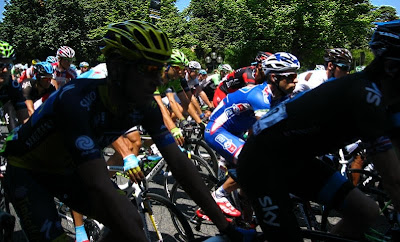 We barely saw the winner, Chris Froome, who was on the other side of the street. To be quite honest, I wouldn't have known a famous face in that crowd if it ran me over, which it almost did.

It was the 100th Anniversary of the Tour de France. Despite the disparaging reputation Lance Armstrong has given it, the extremity of this event is still to be admired. And Annecy is definitely a place to visit if you ever find yourself on a road trip in France.