Belgrade, Serbia was not up on my list of places to see while living in Europe. In fact it wasn’t on the list at all until my good friend Katarina moved there.

“Come! Get a massage, manicure or epilation,” she said as a selling point. While tourist attractions are limited in Belgrade, services are apparently really cheap.

I left on a Friday and stayed for five days. The flight took three hours and the first thing I noticed out of the plane was that the Northwestern part of the Serbia is flat, really flat. Like an endless lawn of worn-out Astro Turf that only gains three dimensions when a tree pops out of nowhere. The Nikola Tesla Airport in Belgrade had one of the prettiest landing strips I’ve every seen; a field of red poppies and purple flowers.


Situated in East Central Europe, Serbia has a long history of being invaded, conquered, glued and separated. It’s been a Kingdom, an Empire, a State and a Republic. After World War I it was tied to the Republic of Yugoslavia (along with Montenegro, Slovenia, Croatia, Bosnia-Herzegovina and Macedonia) and after World War II it fell under the communist rule of dictator Marshal Tito. In 1989, when Tito died, member states beginning with Slovenia began to declare independence from Yugoslavia. Tensions, hurt feelings, resentment, anger and racism fuelled a civil war in the 1990’s that was finally ended with NATO intervention. Since then, a strong sense of Nationalism continues to fuel animosity in different areas of the region. Croatians pretend not to know where Serbia is and Serbians proudly describe themselves as being pure. For Katarina, it makes life difficult especially when she is asked where she is from.

“I get funny looks,” she says.

“As in….are you the type of Serbian who hates Muslims?”

We chuckle over the ridiculousness of it. Katarina is one of the most open-minded people I know. She believes in the good of people so much that she occasionally invites strangers passing through town a place to stay. She did this during my visit. For two days, we shared the apartment with three Romanians, friends of friends, who drove nine hours from Bucharest to attend a Green Day concert. Initially I was nervous about the arrangement, wondering if I’d be wiping puke off the floor, but they turned to out to be extremely courteous We only ever saw them at breakfast at which time we discovered they worked for a non-governmental organization (NGO) which does charity work on behalf of Ryan Hawke, Ethan Hawke’s wife.

The first day in Serbia, Katarina took me to the local market to get fresh fish and vegetables. I was surprised to see many Roma, normally begging off the streets of Switzerland, selling produce. We walked around a bit after dinner. Belgrade is a much more energetic city than Geneva. On every block are cafes and 24-hour bakeries, some selling pizza and other baklava. There is a heavy Turkish and Greek influence in the cuisine. It’s also a vegetarian’s nightmare.


Off the main streets are concrete buildings side by side with cracks slowly making their way down. Cars are parked on both sides of narrow roads making it a little claustrophobic and difficult to walk. The architecture is sprawling. During WWII Belgrade was heavily bombed leaving some ornate balconies next to reconstructed cell blocks of the communist period, side by side more modern sleek designs of the 21st century. Military buildings where NATO dropped bombs are left as a reminder of the war. It’s quite disconcerting to see a bombed-out building right in the centre of the city but also amazing how accurate they were.


My second day in Belgrade was spent along the Sava River, at a park, around a fort and in a church. Getting there without a car was challenging; Belgrade is not yet tourist friendly. I’m ‘told’ many people speak English but I only saw the use of it on a menu. Many street signs are in Cyrillic, which means that even if you manage to learn some Serbia (Hvala means ‘thank you’) you wouldn’t be able to read it.  While a large network of buses and trams exist, maps do not. Bus stops only have numbers with no indication of where they are going. You need a phone to find out when they arrive. Tickets cannot be bought; a transit card with money on it must be obtained at a kiosk and then scanned on the bus. Instructions are not in English.

The river was around 20 degrees and the Savski nasip park was surrounded by lavender and art sculptures. We haphazardly came across a variety festival and a traditional dancing dedicated to Nikola Tesla. 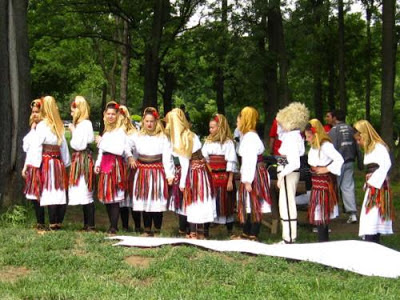 Who is Nikola Tesla? Dancer? Singer? World-class gymnast? At the Nikola Tesla museum they will tell you he was a scientist who ‘created the greatest invention on earth - the induction motor’. According to our 20-something guide, he also created white light (as opposed to the crappy yellow light Thomas Edison used). Serbian’s are extremely proud of Nikola Tesla. His museum displays his inventions, his chair, even his urn. Curiously though his biography is missing. When I asked Katarina about that she whispers that although Tesla lived in Serbia, he was actually born in Croatia. He moved from Serbia to America in his 20’s never came back. He died in New York in 1943.

Before leaving Serbia I wanted to know about history of the region so Katarina took me to the Yugoslavian Museum of History. Unfortunately the ‘history’ part of the museum turned out to be a temporary exhibit so instead I wandered around a display on the evolution of appliances.
There was a small exhibit on the dictator Marshal Josip Broz Tito and his 27-year reign over Yugoslavia but Wikipedia was more informative. There was an interesting display of the various batons used for relays carried throughout the country every May to celebrate The Day of Youth, May 25th, also Tito’s birthday.

The last day of my trip Katarina and I rented bikes and toured around the waterfront from where the Danube meets the Sava River, across the bridge to Novigrad (New Belgrade) and up to the Millenary Monument. Built in 1896 to celebrate the 1000th year of Hungarian rule it is now called Gardos Tower and provides a beautiful view of the clay rooftops that make up Belgrade.

Belgrade, Serbia was not up on my list of places to see in Europe but it surprised me. I’m glad I did.