Guess Where I've Been

For each of the seven years that we've been married my husband and I have celebrated our anniversary in a different country....on purpose. We had the first one in France, then Hungary, Belgium, Australia, Spain, Switzerland and this year, Germany.

"Welcome to Munich," said my brother. Yup, we stayed with him.

Munich, the third largest city in German,  is located south east in an area also known as Bavaria. It's associated most with Oktoberfest (which actually takes place in September), beer, sausage and Hitler. Bavaria is the birth place of the Nazi party.


The first day we toured the city, which is flat, clean, has an excellent transportation system and is sprinkled with opulent museums and funky architecture, the horrible past haunted us, contaminating almost every place we went. My brother showed us Dodger's Alley, a back road Germans took to avoid giving the requisite Nazi salute to the Feldherrnhalle monument. He took us to Konigsplatz, a square where the Third Reich held mass rallies and book burnings. We visited HofBrauhaus, a famous beer hall that was also the place Hilter began spreading Nazi  propaganda and we visited the Stadtmuseum where they had an exhibit Typography of Terror, on posters from 1933 to 1945. In all honesty, it's not that we weren't fascinated by the history but when on the bus home my brother pointed out Hilter's favourite bar, I had to stop myself from wondering what his favourite drink was suspecting that was crossing some line of decency.

The city of Munich however is awesome. There are open markets selling huge varieties of food from truffles to Durian, the smelliest fruit on the planet. Bicycle paths can be used to access the entire city and crime is extremely low. A huge park called the English Gardens is downtown and many people use it to picnic, bath nude (the german's love taking their clothes off) and surf (!) on the Isar river. 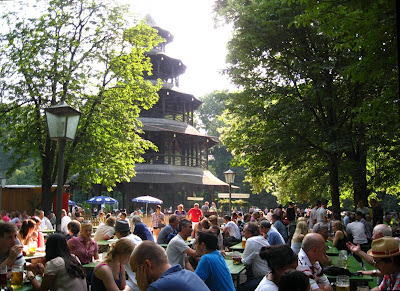 For culture there's the royal palace, Munchner Residenz, decorated with opulent jewellery, rooms and furnishings. There's also a chance to try the Prinzregententorte, a slice of cake made specifically for Prince Regent Luitpold of Bavaria in 1886 and has about two thousand calories, or so I'm told.

Munich is a city where all you need to do for entertainment is walk around to spot many other peculiarities....making our a five-day trip and seven year anniversary worth getting to. Just kidding, sweetie ;)